The utility model belongs to a separate bearing, the inner and outer rings of the bearing are provided with conical raceways, and the rollers are in the shape of a cone. Tapered Roller Bearings The roller and raceway are in line contact, which can bear heavy combined radial and axial loads, as well as pure axial loads. The larger the contact angle, the higher the axial bearing capacity.

The roller Tapered Roller Bearings diameter is increased, the roller length is lengthened, and the number of rollers is increased. The use of convex rollers significantly improves the bearing capacity and fatigue life of the bearing. Spherical and conical contact is adopted between the large end face and the large retaining edge of the roller to improve the lubrication.

This kind ofTapered Roller Bearings can be divided into single row, double row and four row tapered roller bearings according to the number of rows of rollers installed. This kind of bearings also use British series products. 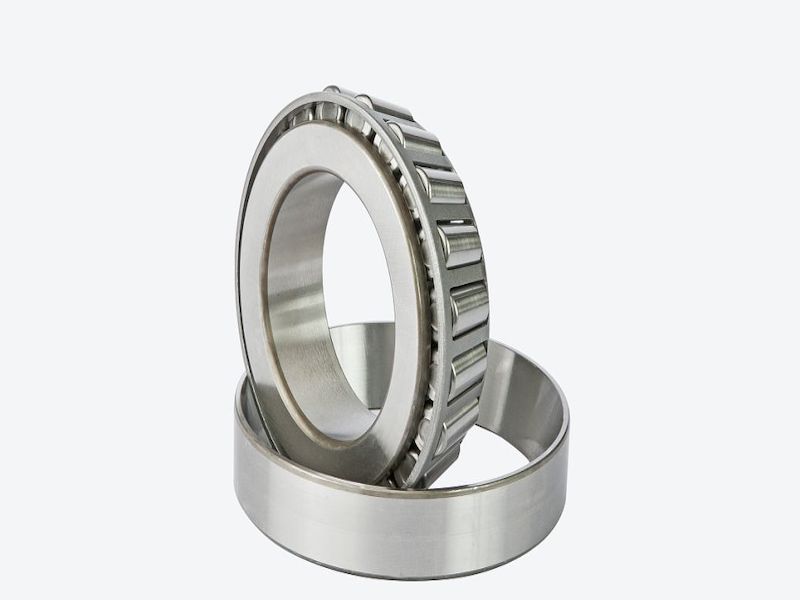 namely radial thrust ball bearing, can be loaded with more steel balls, its radial bearing capacity is greater than that of ordinary ball bearing, Tapered Roller Bearings and can also bear large axial load or pure axial load at the same time. Its allowable working speed is similar to that of deep groove ball bearing and its support rigidity is stronger, but it requires accurate installation and is very sensitive to axis misalignment error,

Generally, Tapered Roller Bearings it does not need to bear the radial load alone, but it must bring additional axial load while bearing the radial load. This kind of bearing has many variants and is widely used. It is often made into three series with 15 °, 25 ° and 40 ° contact angles. The larger the contact angle is, the higher its axial load capacity is. However, it is appropriate to use a small contact angle at high speed.

are used in pairs for small-span rigid double support shafts or precision spindles. When in use, the clearance should be carefully adjusted. Tapered Roller Bearings By changing the axial distance between the inner and outer rings of the bearing, the internal clearance of the bearing can be adjusted.

A single bearing of this type can only bear the axial load in one direction. At the same time, other bearings need to be configured to offset their additional axial forces. When installed in pairs,Tapered Roller Bearings  their additional axial forces offset each other, and they can bear the axial load of two forces upward, and have strong axial limit capacity in two directions,

Generally, two sets of bearings are installed in pairs, with their outer ring wide end face opposite (back-to-back) or narrow end face opposite (face-to-face), in which the rigidity of the back-to-back installation bearing system. In order to facilitate installation in pairs or groups, some bearing factories supply bearings Tapered Roller Bearings in pairs, three sets in groups and four sets in groups.

the processing consistency of the supplied bearings in the same batch is good, the load is borne more evenly during use, and the additional axial forces offset Tapered Roller Bearings each other more thoroughly.

This type of bearing can be divided into two types: separated type and non separable type. The separated type bearing is used when the installation conditions are limited and the outer ring or inner ring is required to be removed from the whole set of bearings for separate installation.  Tapered Roller Bearings Because the separated type angular contact ball bearing is widely used in magneto, it is also called magneto bearing. In this type of bearing, the locking port is on the inner ring, which can be adapted to higher speed.